From Seattle To Vancouver. 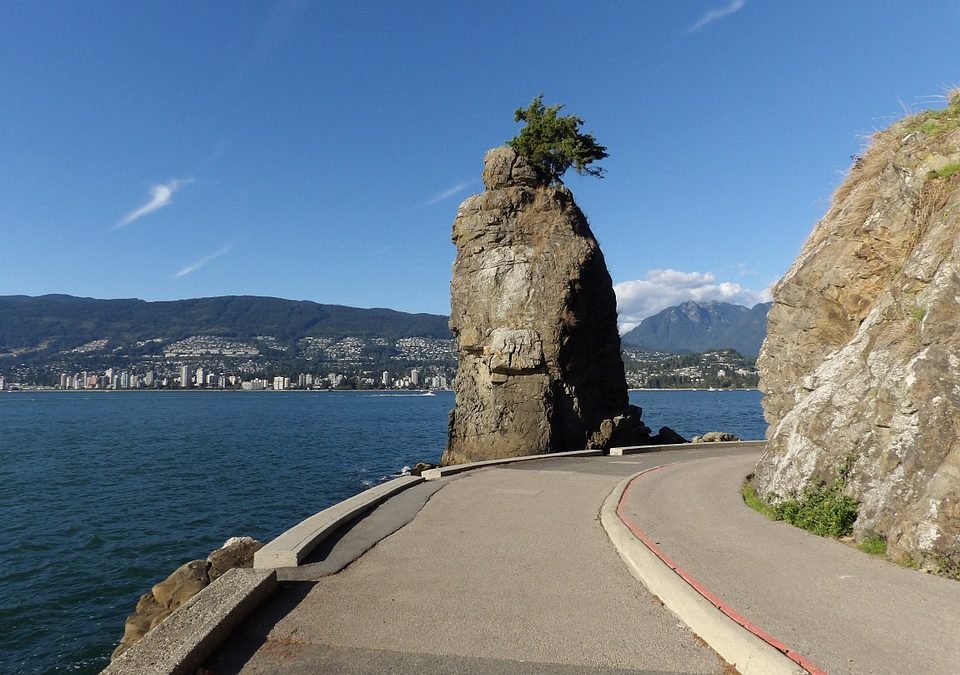 NOTE: This is a wonderful note from Sarah who recently visited Vancouver.

After a successful trip to Seattle, we decided to visit its sister city, Vancouver. Being resident Canadians, we didn’t have to worry about crossing the border for a change! It was a clear, and cold day, quite unusual weather for the normally balmy winter climate Soutern British Columbia receives. We zipped into the city, and found our way to Stanley Park, one of the largest urban parks in North America.

Located in the heart of Downtown Vancouver, Stanley Park is one of the highlights which makes the city world renowned. There’s about 15 square kilometres (10 square miles) of freshly cut clean grass, old-growth forest, and secluded lagoons. Several prominent features include a zoo, a circular mini-train ride, and a very popular sea-wall. There’s almost an endless amount of things to do in this park, and it’s just a few minutes walk from the city core.

The drawback though, is that you have to pay for parking 🙁 When we visited the park, it was almost deserted due to the freezing cold temperatures of -5C (24 deg. Farenheit), however Stanley Park is normally bustling during the summer months. We parked our car in a 10 min ‘loading zone’ and put on the 4-way flashers. Jamie checked to make sure there weren’t any cops before we left to head down to the seawall — we were gonna try and get away without paying for parking 🙂 It was so cold outside that portions of the ocean were frozen. When the ocean freezes, you know it’s a cold snap! I accidentally slipped on some ice on the edge of the seawall, I was fortunate enough to grab on to the edge to avoid falling into the icy cold depths of the ocean.

Whew, that was close! After the adrenalin rush died down from that episode, we headed back to the car and drove over to the Brockton Point Lighthouse where we posed for pictures.

The next point on the seawall was the Lion’s Gate Bridge. Seeing as how cold it was we drove to it again, instead of walking the wall. Shame on us. The Lion’s Gate connects the cities of Vancouver and North/West Vancouver. It is a very old bridge, only 3 lanes wide, and constructed in the early part of the century. Locals are very familiar with this bridge, and describe it as one of the busiest traffic crossings in the country! The BC government is looking into a replacement for this bridge, as its life is limited. (both the governments’ and the bridge 🙂 Several proposals have been made, including a tunnel underneath downtown.

The setting sun made for some great pictures overlooking the bridge. Next, we were getting hungry, so we ventured into a part of Vancouver known as Gastown. Gastown is the oldest part of the city, with plenty of rich history behind it. A man is known as “Gassy Jack” set up a saloon in the late 1800’s along with a hotel and other typical village buildings. The village eventually grew into a town known as Granville, where Downtown Vancouver currently is.

Post-1960’s growth in Vancouver was enormous, as many people recognized the potential of living in this region. Currently, there are almost two million people living in the Lower Mainland, which includes Vancouver city and surrounding suburbs.

Gastown is famous for the Old Spaghetti Factory, a charming restaurant which features a lot of Vancouver’s history and a great menu. Service at this restaurant is excellent; we highly recommend it to other visitors. After dinner, we checked out the steam clock, which really does run on steam! Every hour, steam will shoot out of the clock in big bursts.

Seeing as there was still time left in the evening, we heard from some of the locals that there was a great place to sit and relax with a beer, called the Georgia Street Hotel Jazz Club. Every night, talented jazz musicians play their hearts out at this place, and the music is just excellent. From soft piano jazz to upbeat James Brown covers, this place is one of the finest. And the best part is, NO COVER CHARGE!!!
I was quite impressed with Vancouver.

Although not as big in size as Seattle, the cultural atmosphere more than makes up for it. Known as a ‘mosaic’ community, one can find dozens of different ethnic groups from all over the world, who’ve chosen to make Vancouver their home. Predominant cultures include Chinese, Filipino, Italian, Portugese, and Vietnamese. Encouraging immigrants to continue practising their native customs instead of ‘assimilating’ allows for this unique mosaiclike community. All in all, we plan on coming back!